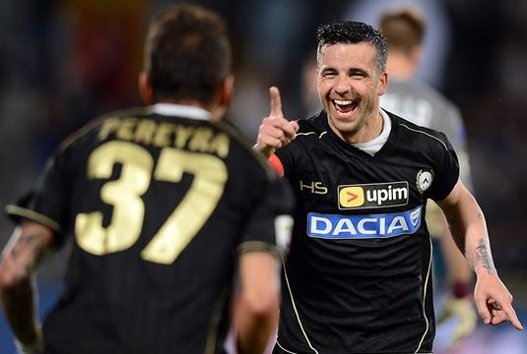 Let’s hear it for Antonio Di Natale, Udinese’s veteran (and criminally underrated) talisman who ended his professional career at the age of 36 yesterday with a hat-trick in his final game for the Zebrette in a 3-3 home draw against Sampdoria.

Di Natale, who originally announced he would be retiring at the end of the season at the turn of the year, scored his 15th, 16th and 17th league goals of the campaign (including an 88th-minute equaliser) against Samp to shore up a 13th-placed finish for Udinese in his 370-somethingth appearance for the club.

However, it’s funny what hat-tricks will do to a striker, as Di Natale faintly hinted during the emotional farewells after the final whistle that he may “try” to carry on next season.

“It’s a pity the season is ending now, as I am in good physical shape and enjoying myself. Let’s hope I continue like this.

“At the start of the season, the whole team struggled to do what we’d been able to in three years together.

“But you weigh things up at the end, and I still got 17 goals in the league.”

Don’t hang out the bunting yet.

Anyway, while we’re on the subject, it never hurts to see this little beauty again…