Pies needs an official England World Cup song, and we want YOU to choose it for us.

We’ve got a shortlist of XI songs for you to vote for. Vote, then leave a comment with the reason behind your choice.

So the best comment will win this smashing table football game! Hell yes. It comes from those people at IWOOT and you can read more about it here. 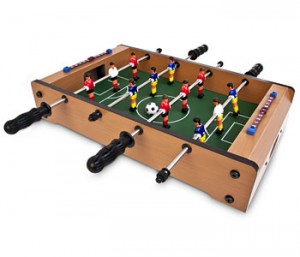 There’s also a runner up prize of the Kickster DIY goal kit
Also, courtesy of Griffin Technology we have six sets of earphones, and power chargers for iPhones.

Excited? Good. So, here’s the shortlist. Take a listen, vote (below), leave a comment, tell your friends to do likewise…

2. Fabio, by The Competition

5. When England Rule The World, by Chris Martini

6. Come On You Lions, by Chenille Steele

8. Sing It For England, by Young Stanley

10. Skank For England, by DILE

11. It’s Time For England, by Barker and Hartley

Which one should Pies adopt as its official England song? Vote below (you have until 7 June, when the poll will close) and leave a witty comment if you want to be in with a chance of winning a table football set: