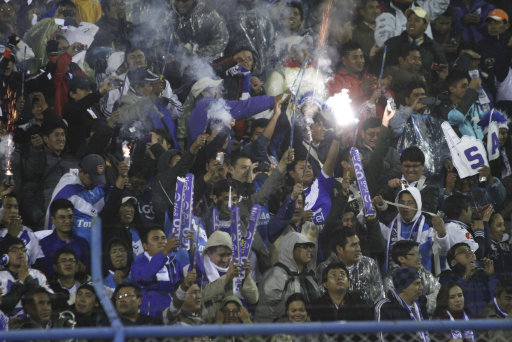 This is a sad one. A 14-year-old San Jose fan was killed during last night’s Copa Libertadores match against Corinthians at the Estadio Jesus Bermudez in Bolivia after being hit by a flare reportedly thrown into the home fans from the Corinthians section.

According to the Press Association, the police originally thought the young fan, Kevin Douglas Beltran, died as the result of a “bomb sound” (whatever the hell that means?) but it has now been ascertained that – and there’s no easy way to say this – he died after a plastic tubular flare landed directly in his eye and “penetrated his skull”, killing him instantly.

Revolted by the tragedy, San Jose supporters branded their Corinthians counterparts “assassins” and threatened retribution after the game. The police therefore did not let away fans leave the stadium, while both club presidents delivery highly emotional statements to the press after the game.

After perusing the television footage, Bolivian police have arrested 12 Corinthians fans accused of involvement in the confusion, with six of the 12 fans found to have ‘gunpower’ residue on their hands – though flares and fireworks were being set off in the stands continuously throughout the game by fans of both sides.

A tragedy made all the more tragic by the age of the innocent victim. A young lad – a rabid San Jose fan by all accounts – who went to watch his team and never came home.