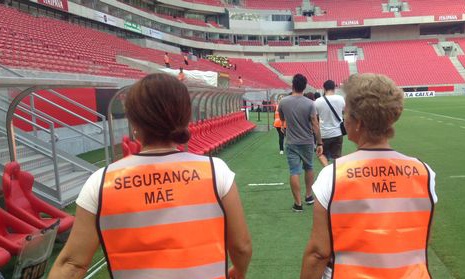 Brazilian club Sport Club do Recife have employed a team of supporters’ mothers to act as stadium stewards in a bid to curb crowd trouble at their stadium.

Sport trained the 30 ladies to patrol the terraces during Sunday’s derby against Nautico, monitoring the crowd while each wearing an orange hi-vis vest that read SEGURANÇA MÃE/SECURITY MUM on the back.

With Brazilian football currently struggling to keep a lid on escalating fan violence issues, the entire crowd was warned of the security mums’ presence via the big screens both before and during the game and that they’d get a clip round the ear if they stepped out of line.

“The idea was to make the most fanatical supporters aware and help in some way to bring peace to stadiums,” said Aricio Fortes, who is the vice-president of Ogilvy (the PR company responsible for the idea).

“At the end of the day, no one wants to fight in front of a mother, especially his own.”

Ingenious. You don’t arse around in front of your mum – that’s just the law.

For the record, Sport won 1-0 and proudly announced after the game that no arrests had to be made.

All hail the Security Mums!