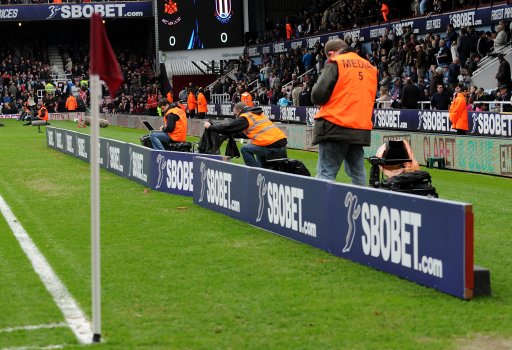 Stoke City have pioneered their way to a few footballing firsts of late; famously becoming the first side to openly field a gibbon in their first team a few years back and, in the process, also finding themselves ahead of the curve by providing said gibbon with a cutting-edge smock to wipe his balls off on.

With money becoming more and more of a factor in the upkeep of a football club (yep, we’ve noticed it too!), the Potters have devised an ingenious way to up their revenue stream – by doubling the amount of pitchside LED advertising hoardings, from one row around the perimeter to a groundbreaking two! This is the future people.

This via EPL Talk:

“Beginning in the 2012-13 Premier League season, Stoke City will be the first club in the league to feature two rows of advertising signboards around the perimeter of the pitch.

“In recent years, we’ve seen advances such as electronic signboards that can flash, change and rotate advertising messages during a game, but this is a first in the EPL — after a successful test during Euro 2012.”

The elegantly simple ploy will see the two rows of signboards angled so as to both be visible on television while still allowing Rory Delap sufficient room to launch his ballistic throw-ins into the six-yard box from the half-way line.

The second row will feature static adverts so as not to divert attention from the front row – which will feature the animated adverts currently already in use in the Premier League.

“Gentlemen, gentlemen. I think I’ve had a epiphany here… We’ve done two rows. How about, THREE?”

Mark our words, it won’t be long. As wages and costs continue to swell and FFP looms, clubs are going to be exploiting every tiny little opportunity to cram their stadiums with sponsorship: Centre-circles with Disney mouse ears, the ‘Go Compare’ jingle blarting out after every goal, Arsenal’s technical area sponsored by Injury Lawyers 4 U.

We’re on the eve of Ad-mageddon people. It’s going to get ugly.