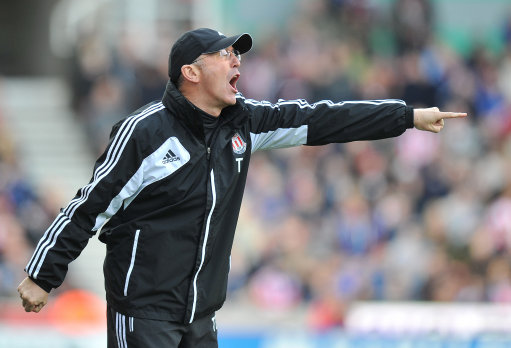 We’re guessing it has nothing to do with the pig’s head incident or the fact that the Real Madrid job is being freed up imminently, but Stoke City have just announced that Tony Pulis is to leave the club at season’s end after seven years in charge at The Britannia.

The news isn’t quite official yet, but Pulis has been in talks with chairman Peter Coates all this morning and, according to BBC Sport, the announcement isn’t far away now.

It’s easy to be snooty when it comes to Pulis. Of course he wasn’t the most cultured tactician in the game and Stoke were liable to descend into drudgerous hoofery at the drop of a hat – hence all the punchlines – but the man worked wonders at that football club. He obviously loved working at The Potters and really did give them his all.

You may hate his football, but you must admire his achievements: five consecutive seasons in the Premier League after a 23-year absence, one FA Cup Final and a maiden foray into European football no less. Not bad for a man who looks more like a market stall trader with every passing year.

The main problem, we suppose, is that it began grinding on fans and neutrals alike that Stoke were merely happy to consolidate their place in the top flight every season rather than aspire to something more than a team of mid-to-lower-table cloggers – though we must admit that when the calls for Pulis’ head began ramping up at the end of the season our immediate reaction was “who the hell do you think you are? You’re Stoke City for Christ’s sake!”

Pulis won’t be short of offers as and when they come up (he could easily navigate a side out of the Championship with his brand of tough-nut nous) and maybe this is the managerial crossroads the Potters needed to push on?

Either way, we wish both parties the best of luck in their future endeavours.