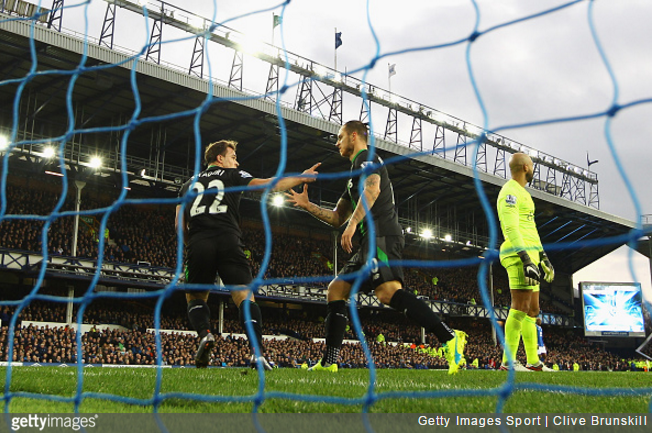 Admittedly, Pies thought we’d witnessed a stone cold pearler watching the game in real time, but it would appear that Xherdan Shaqiri’s exquisite first-time lob scored during Stoke’s 4-3 Christmas ding-dong with Everton wasn’t quite as sublime as the man himself would have us believe.

Speaking to the Stoke Sentinel after the game, Shaqiri appeared to dispel any talk of the goal being a fluke by claiming he knew exactly what he was going for all along:

The finish was really good. I knew what I wanted to do…does it look like I didn’t?

Arnautovic said it was a cross? Well, Arnautovic talks too much, man.

However, the cat may just have been let out of the bag by one of Shaqiri’s teammates – Charlie Adam to be precise – who has revealed that the stocky Swiss winger later admitted the finish was indeed a shanked cross to Marko Arnautovic, who was busy making inroads at the back post.

Waffling away on TalkSPORT, Adam said:

No, no way he meant it, I asked him after the game and he said he was trying to cross it for Marko in the middle and it was lucky.

It looks a great finish but I’m delighted for him because over the last few weeks he’s been playing well but just needing the goals and he got two there at the weekend.

We’re positive Xherdan will thank you for your candour the next time he sees you, Charlie.

Why not just let the man be great?