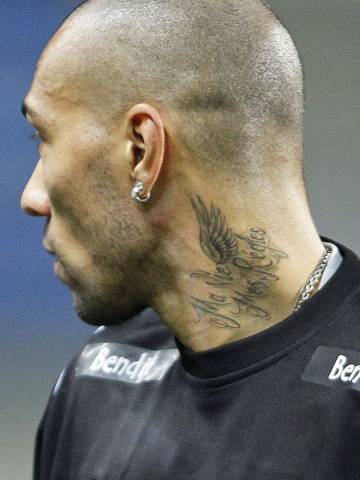 The keen-eyed amongst you may have noticed that Stoke striker John Carew unveiled some fresh ink not so very long ago, though you may not have spotted the rather embarrassing spelling mistake that lies therein.

The big Norwegian has had a tattoo on his neck that reads ‘Ma Vie, Mes Régles’ – which theoretically should translate (Babelfish approved) as ‘My Life, My Rules’.

However, a French professor at Oslo University has highlighted the fact that the use of the accent over the word ‘Régles’ means Carew’s motto translates rather differently.

Apparently, by incorporating an acute accent (é) instead of a grave accent (è), Carew’s daubings translate literally as either ‘My Life, My Period’ or ‘My Life, My Menstruation’.

Now, are you going to tell him, or shall I?