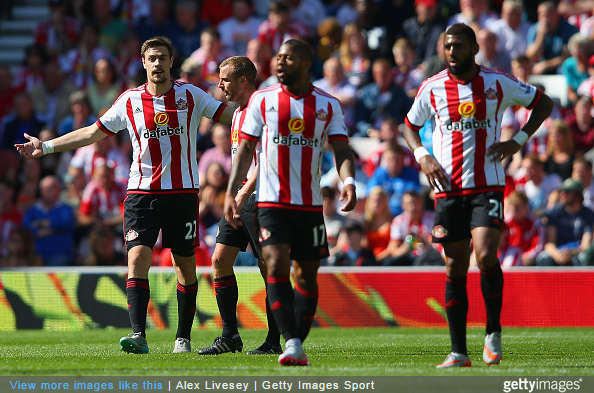 Already rock bottom of the Premier League after a fairly risible start to the season, Sunderland are already being touted by many as relegation fodder this season.

Sadly, this would appear to extend to their principle sponsors, online betting company Dafabet, who are firmly backing the club to be jettisoned from the top flight come May.

Dafabet, who were unveiled as Sunderland’s new shirt sponsors in June, have made Dick Advocaat’s side 5/8 favourites for the drop after being soundly beaten by Leicester and Norwich in their opening two fixtures of 2015/16.

Not only that, but just to rub it in even further, Dafabet have also made Sunderland (whose club crest appears proudly at the top of their homepage, along with images of Seb Larsson, Lee Cattermole and Jermain Defoe) 1000/1 outsiders of all 20 Premier League teams to finish inside the top four

They’re probably spot on, but still…ouch.