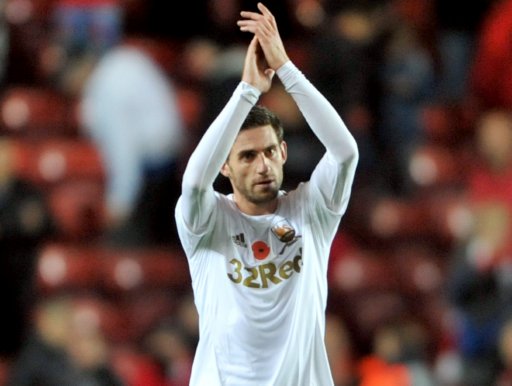 He’s right to applaud himself, as aptly-named Swansea City right-back Angel Rangel spent last night driving around Swansea with his wife and helping every homeless person they came across by handing out food that they had “going spare”.

After having Tweeted his followers asking in which areas of the city he’d find homeless people, the Rangels set out and spent an hour or so distributing food after ending up at a homeless shelter.

The Spaniard then Tweeted: “Wow we r amazed at the amount of tweets we r receiving. Thanks a lot but it was just a little gesture we drove for only 1 hour and felt great”.

He then told CNN:

“My wife, Nikki, who is a very caring and charitable person, asked if we could have them for the homeless rather than see them thrown in the bin.

“They agreed and we drove around Swansea for over an hour, but couldn’t find any homeless people as it was so cold out on the streets with all the snow.”

By his own admission it was just a ‘little gesture’, but it’s sure enough to melt our cold, cynical hearts.

Good on you Angel.