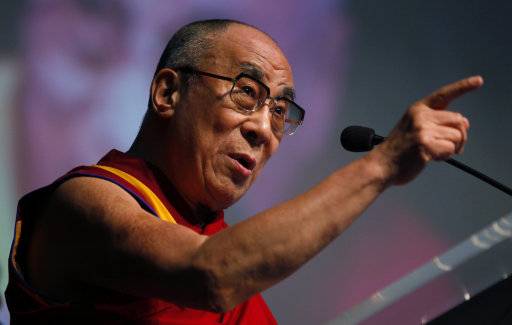 “You’re going home in the back of an ambulance!”

He never seems to go anywhere without his official Bradford City claret-and-custard robes anyway, but the Dalai Lama has firmly nailed his colours to the mast ahead of Sunday’s Carling Cup Final by sending the Bantams a blessed ‘good luck’ letter. 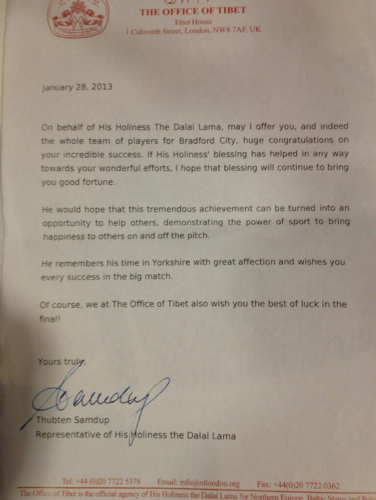 The letter, from the Office of Tibet, was sent to the club a week or so ago and reads thus:

“On behalf of His Holiness The Dalai Lama, may I offer you, and indeed the whole team of players for Bradford City, huge congratulations on your incredible success.

“If His Holiness’ blessing has helped in any way towards your wonderful efforts, I hope that blessing will continue to bring you good fortune.

“He would hope that this tremendous achievement can be turned into an opportunity to help others, demonstrating the power of sport to bring happiness to others on and off the pitch.

“He remembers his time in Yorkshire with great affection and wishes you every success in the big match. Of course, we at the Office of Tibet also wish you the best of luck in the final!”

The Dalia Lama’s relationship with Bradford all started – as romance so often does – at a business convention in Leeds last year when one of the club’s fundraising groups, ‘Friends of Bradford City’, bestowed his holiness with a personalised shirt with his name and number (14, in case you were wondering – as he’s the 14th Dalai Lama) on the back.

As celebrity fans go, being able to list the Dalai Lama as one of your number is quite impressive. Who knows, maybe Swansea will be able to tap up Bonnie Tyler for a similar – though altogether raspier – pep talk come the weekend?