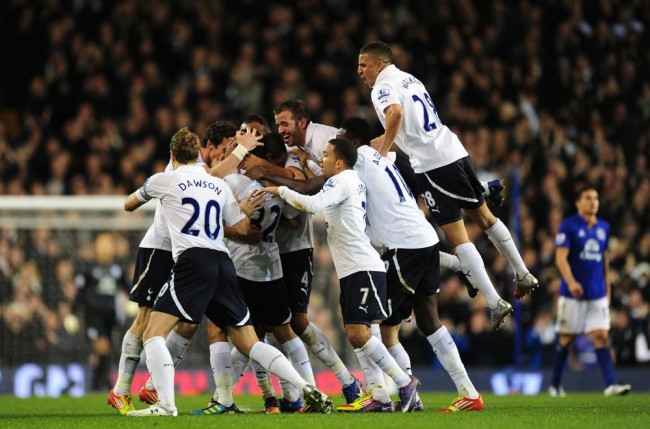 Tottenham went level on points with second-placed Manchester United in the Premier League pile last night, after goals from Aaron Lennon and Benoit Assou-Ekotto (a 30-yard stonker – he doesn’t score often, but when he does… etc, etc) afforded Redknapp’s rabble a comfortable 2-0 win over Everton at the Lane – a 14th victory from 20 league outings.

The result (incidentally, this was the rescheduled opening day fixture called off after the outbreak of the London Riots last August) also took Spurs to within three points of leaders Manchester City, and ‘Arry’s dander was decidedly ‘up’ after the game:

“It’s not impossible for us to win the league. We have a chance. The players believe we have a good chance.

“It’s not beyond the realms of possibility. We are in there. It’s going to be hard but we are not a bad side. We have some real quality. We can play and we have a good spirit.”

Two quick questions: Firstly, does Assou-Ekotto always play in odd boots? – and secondly, does anyone really think Spurs are up to a title push this season? I’m tempted by a cheeky flutter myself.