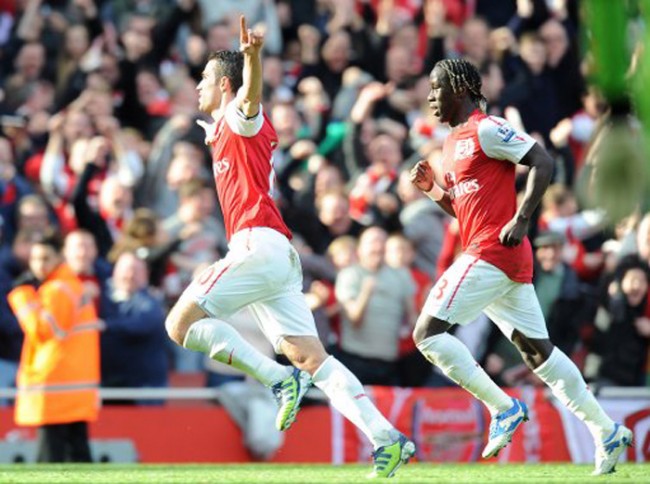 Arsene Wenger’s stuttering Gunners went in to Sunday’s north London derby as most people’s underdogs, however, inspired by a fine performance from Tomas Rosicky in midfield, Arsenal conjured up a magnificent comeback against a Tottenham side brimming with confidence.

Things got off to a fantastic start for the visitors, when after just four minutes, Louis Saha was given far too much space to fire home, albeit courtesy of a deflection. However, the Gunners fought back well and came close to grabbing an equaliser courtesy of both Robin van Persie and Tomas Rosicky. However, just after the half-hour mark, Spurs broke quickly, with Gareth Bale adjudged (rather harshly) to have been fouled in the box by Wojciech Szczęsny. Former Gunner Emmanuel Adebayor converted the resulting spot-kick to put daylight between Spurs and the Gunners.

However, Arsenal fought back immediately, bagging two goals just before the break, courtesy of a superb header from Bacary Sagna and a top class effort from Robin van Persie.

Shell-shocked by that late first-half collapse, the Lilywhites crumbled after the break, and were outplayed by an Arsenal side rediscovering the kind of attacking verve that has eluded them so often this season.

Booed in the first-half by the disgruntled Emirates crowd, Theo Walcott won over the fans with a second-half brace after Rosicky, playing arguably his best-ever game for Arsenal, had made it 3-2 on 51 minutes.

To make matters worse for Spurs, Scott Parker was sent off late on for a second bookable offence.

The win was all the more sweet for the home side considering that in the two last north London derbies at the Emirates, it had been Arsenal who had relinquished a two-goal advantage.

With seven points now separating the two north London sides, and 12 games still to play, maybe that apparent power shift in north London isn’t so clearcut after all.