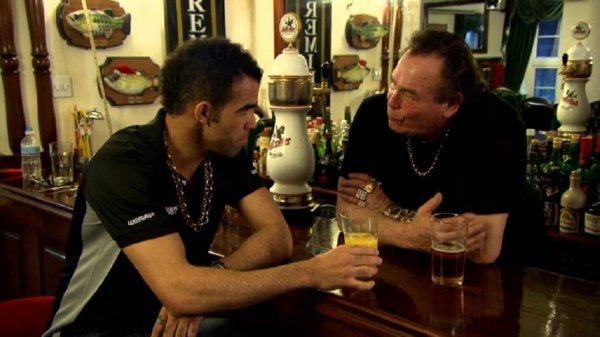 It’s fairly well established that Tottenham midfielder Sandro is pretty ace, what with the dancing in car parks, the ‘Beyond the Thunderdome’ hair, the semi-naked kung-fu and the gum shields – but his latest adventure is coming straight out of the box labelled ‘Eh?’

Apparently, Sandro has become obsessed with darts after being bought a dartboard for Christmas – playing constantly at home and even christening himself the ‘best darts player in Brazil’, though we don’t imagine the field is particularly competitive.

Anyway, Sandro’s penchant for chucking the arrows has now seen him make acquaintances with Bobby George – the gruff, golden goblin king of darts – going round for a few games and a couple of jars (of orange juice) at the former double world finalist’s home in Essex.

“It started when I was watching on TV and the atmosphere was interesting. A team-mate bought me some darts. I met Bobby George and he showed me how to play. Now and then he comes to my house to play. I play his son. He’s good.”

Unfortunately, the damn video won’t embed, so you’ll have venture forth from the safe confines of Pies, through the wildy wilds of the internet, to the magical kingdom of PremierLeague.com to watch it.

Things we learnt: Sandro ain’t half bad with the arrahs and Barry George lives in exactly the kind of house we thought Barry George would live in – basically, a 5,000-square-foot Essex boozer.