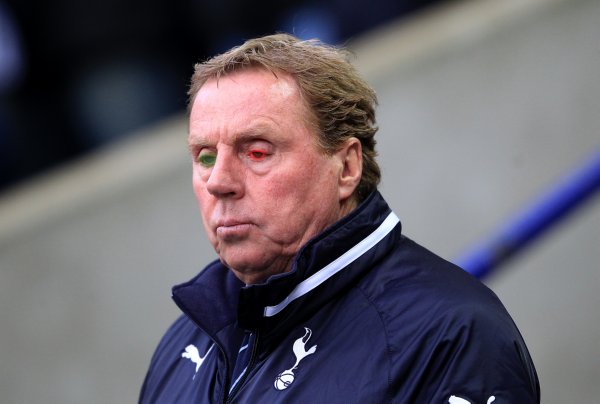 While still at prototype stage, we understand that Tottenham chairman Daniel Levy is seriously considering a like-for-like change at White Hart Lane after releasing Harry Redknapp back into the wild while the whole world slept last night – installing an ‘ArryTron Automaton Unit (catalogue code name: ‘Two-From-Eight’) as his new manager.

– Complex interactive voice response algorithms will ensure that vague stock answers are given under any line of questioning (including under oath), e.g: A question about a transfer target (Player X) will result in ‘ArryTron responding that ‘he doesn’t want to talk about other people’s players BUT he’s definitely had a look at Player X and the chairman’s trying to do a deal for Player X.’

– The same complex algorithms will also result in ‘ArryTron taking singular personal credit when positive praise is being administered and referring to himself in collective terms when under criticism.

– In-built analytic telemetry will ensure that only the top 11 players at his disposal will be picked all season. Sadly, at the prototype stage, fatigue levels cannot yet be factored in during team selection.

– ‘Auto Account Flush’ system ensures all cash at ‘ArryTron’s disposal can and will be spent immediately. Feature can also be used remotely to dump all monies into auxiliary Scrooge McDuck vaults should HMRC become suspicious of account activity.

– Facial recognition software yet to be installed. As is, ‘ArryTron is programmed to simply refer to all players around the globe as ‘the lad’ to avoid database confusion. All players over 6’1” will automatically be referred to as ‘the big lad’.

– Comes with car door attachment as standard to give all interviews that ‘impromptu car park’ feel. Range of models available in several modern colourways.

– ‘Wrecking Ball mode’ will gut, bankrupt and destroy any given football club within a three-year time frame. Though ‘ArryTron will emerge completely unscathed, deployment is highly unadvisable.

– Prototype still vulnerable to small electro pulses; may result in optic sensors adopting a ‘10,000-yard stare’ fixed on middle-distance while facial motors glitch for prolonged periods (patch is being designed).