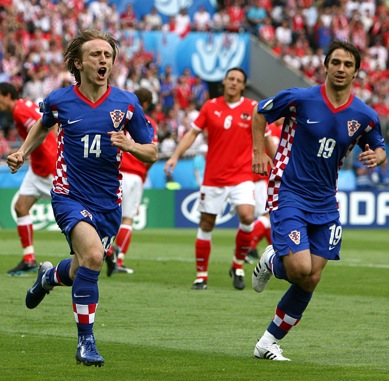 Ostensibly, Niko Kranjcar was signed by Spurs to deputise for the injured Luka Modric. But after a slow start to his Tottenham career, Kranjcar has been in stunning form of late, giving his manager one of those clichéd ‘nice’ selection headaches.

Kranjcar and Modric have played together with great success for Croatia, often with the former out wide and the latter through the middle. So Arry Redknapp might think about doing the same for Spurs. Modric might play in the mystical ‘hole’, as the designated second striker:

That looks like a good way to set-up the team’s front six for away fixtures, with the fast counter-attack in mind; Modric can drop back to join the midfield quartet when Spurs are on the back foot, then link play between the midfield four and the main striker on the break.