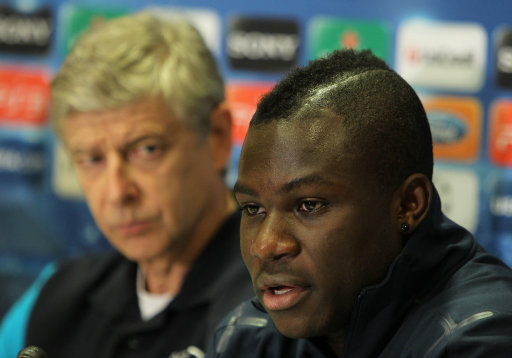 Me and my cousin Lethal Bizzle have a new rap – ‘My boss is French, he don’t think I’m Dench’

Young Arsenal midfielder Emmanuel Frimpong has been charged by the FA over Tweets he recently made referring to the Gunners’ north London rivals, Tottenham. The 20-year-old, who is currently recovering from a cruciate ligament injury, received abuse from a Spurs fan on Twitter before responding by calling the fan “Scum Yid”.

Much has already been said about the use of the word ‘Yid’, whether it is a racist term of abuse or whether, in the context of English football, it is a word which has transcended its racist meaning, with many Tottenham fans themselves calling themselves ‘Yids’.

Frimpong doesn’t seem like the sharpest tool in the Twitterverse and has found himself in hot water over his Tweeting before. However, I’m not sure the young eejit meant his offending Tweet to be a racist slur. Still, maybe its time for all fans to drop the word from their vocabulary for good.

Anyway, the Ghana-born star will have to answer to the powers-that-be at Wembley. Here’s the FA’s statement…

“Arsenal’s Emmanuel Frimpong has been charged under FA Rule E3 for improper conduct in relation to recent comments made on Twitter.

“The allegation is that Frimpong posted comments amounting to improper conduct and/or which brought the game into disrepute, which included a reference to ethnic origin, faith or race.

Personally, if I was a football manager, I think I’d ban my players from all social networks full stop. Seems more hassle than its worth.