Gareth Bale has branded Charlie Adam a ‘coward’ after another dismal challenge from the orthodontically-challenged Liverpool midfielder saw his Tottenham counterpart leaving the stadium in Baltimore on crutches.

Of course, this isn’t the first time Adam has butchered Bale with a malicious tackle, with a frankly disgusting challenge back in 2011 – while Adam was still at Blackpool – bringing Bale’s season to a premature conclusion and putting him out of action for the best part of three months… 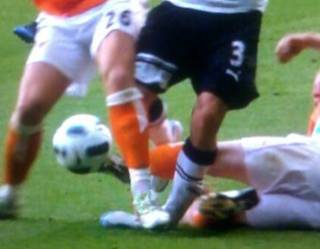 Here’s what Bale has had to say on the matter:

“I was surprised to see a challenge like that in a friendly. We are over here to build up our fitness and get a good workout. But what he did was over the top. Some people are like that and it’s just wrong.

“It’s flattering if players try to take you out in a game but when it threatens your career it becomes more serious.”

“There are pictures on the internet of what he did before when he snapped all my ankle ligaments. I was out for three months that time and one player told me he went out to do the same thing to me again. He’s come for me twice now – and he’s got me twice.

“From what I’ve seen of him on pitch, I think he’s a bit of a coward. I haven’t had an apology from him or anything like that. But I don’t really want one from him, to be honest.

“That’s what kind of person he is like. He’s done it before. I’m not going to accept his apology.”

For the record, Bale actually continued playing and made it to half-time before being substituted so the injuries sustained couldn’t have been overly serious – not that that excuses Adam for his deliberate attempt to once again do the Welshman an extreme physical discourtesy in an utterly meaningless friendly.

Did Bale piss on his kids on Christmas Day or something?