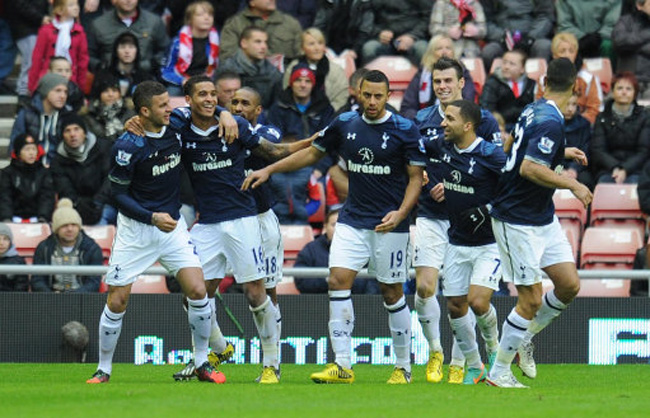 AVB’s Spurs side moved into third place in the table after coming from behind to beat Sunderland at the Stadium of Light.

Irish defender John O’Shea had given the home side the lead on 40 minutes, somewhat against the run of play. Indeed, both Gareth Bale and Emmanuel Adebayor had fine chances to open the scoring before the Black Cats finally made the breakthrough. Adebayor’s miss was particularly appalling, with the former Arsenal man hitting the bar from all of two yards.

However, after the break, the north Londoners bagged an equaliser almost immediately,  courtesy of Sunderaland defender Carlos Cuellar, who headed into his own net from Kyle Walker’s corner kick on 48 minutes

Spurs could smell victory and just three minutes later, the second goal  came, when England wideman Aaron Lennon netted.  Martin O’Neill’s men worked hard to get back into the game, but ultimately the Lilywhites were worthy of their win.

Oh, and Bale also picked up his now customary yellow card for diving.

While the north Londoners go third, at least until tomorrow, Sunderland find themselves in 13th.