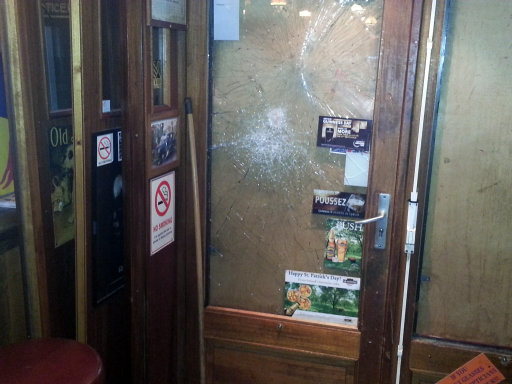 Coming just a couple of months after Tottenham fans were mauled in a pub in Rome before their Europa League fixture with Lazio, three Spurs supporters ended up in hospital last night after being attacked by a group of hooded thugs in a Lyon bar on the eve of the club’s last-32 second leg against Olympique Lyonnais.

According to the BBC, sports journalist Christian Radnedge, a Tottenham fan by trade, was in the Smoking Dog English-style pub when the trouble kicked-off, reporting to BBC Radio 5 live that the men, wearing balaclavas and hoods, gave Nazi salutes before launching the attack – though he also said he did not believe the men were Lyon fans.

Apparently a lit flare was thrown into the pub (along with several cast-iron chairs and pieces of wood according to eye witnesses), which was filled with 150 people – mostly Tottenham fans – to watch the Champions League on the television, with English landlord Dave Eales telling the Beeb:

“The front of the pub, which is made up of reinforced glass, was attacked by 20 to 25 people. They threw projectiles through the windows. There was a stand-off. They didn’t get into the bar. Then it calmed down.

“Then they came back a second time and it all started again. There were three injured Tottenham fans taken away by ambulance.

“One of them had a head injury. I’m not sure how bad it was.”

Thankfully, the last update on the fans on the fans who were taken to hospital, coming via an official Tottenham club statement, is that all escaped “without serious injury.”

Of course, as with the Rome attack, it is believed that there were anti-Semitic motives behind the unprovoked violence, with Tottenham famously regarded as a historically Jewish club.

Here’s a few more photos of the aftermath…