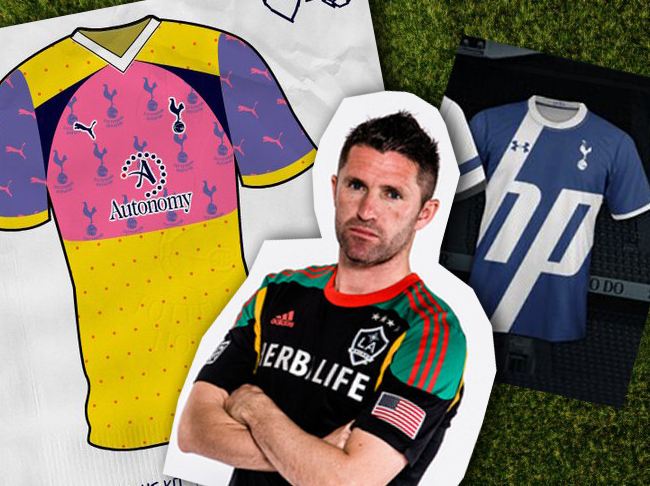 Last Monday, Under Armour unveiled their new Tottenham kits from behind a wall of exploding marketing bricks.

I was secretly hoping a sozzled Gazza would emerge with a fishing rod and a six-pack of lager. But instead I was relieved to find that the mental kit designs ‘leaked’ before the big day (some of which were absolutely bloody terrible) were just dreamed up by Spurs supporters.

Instead, the proper shirts were designed in isolation by a team of highly paid professionals, at Under Armour’s headquarters in Baltimore, USA. The cream of America’s sportswear design industry were enlisted to make Gareth Bale— a Welshman—look trendy.

You see, I’ve been increasingly worried about this latest trend of supporters having their say in designing their club’s kit. Fan-power is en vogue for kit design at the moment, and it’s catching:

Olympique Marseille ‘crowd sourced’ their team’s horrendous “denim” strip from 60,000 designs scribbled by supporters. Real Sociedad printed some of their fans’ names on the front of their shirt. And this year my local team, LA Galaxy, held a competition to let fans design its third kit—the result was a Reggae-flavored abomination, like a joke kit made for a Bob Marley testimonial match.

Look at poor “unidentified fan” up there modeling it. See how sad he is? 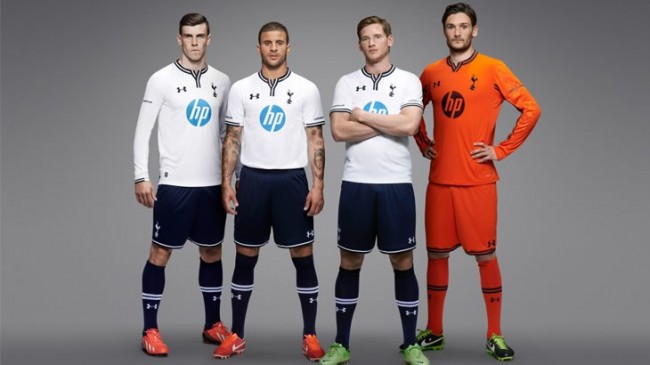 Instead of hiring civilians, Under Armour left it to their man in charge, Gabriel Rodriguez, who is obsessive about Tottenham shirts, like me. I’m a bit embarrassed to admit to writing two books about Spurs shirts, like some kind of club megastore Rain Main. And while I was really impressed that Under Armour also hired a former NFL star to work as a kit-liaison officer with Tottenham to make sure shit went right, I was still quite concerned before the big unveiling.

Historically, when a new sportswear brand take over a team, they tend to tread very carefully in the first year; producing a safe, traditionalist strip. Then in the second year, the multi-colored crayons come out, the designer drops acid and they go to town creating a monster (see Warrior’s embarrassing Liverpool away and third kits this year). 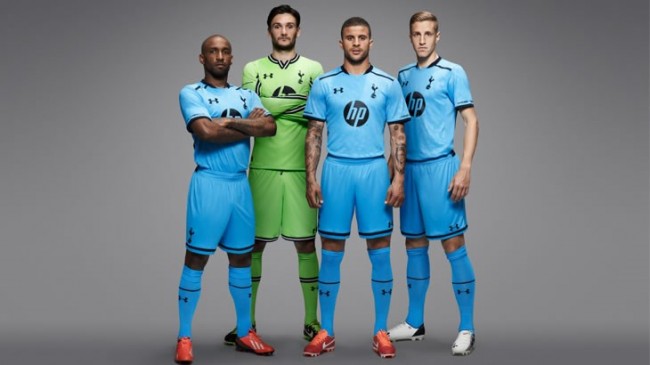 The away strip ain’t half bad either

That said, Tottenham’s new home strip is a triumph: Historically accurate, the deep blue shorts were inspired by the colours of Spurs’ most successful era, the 1960s. I like the ‘Capri’-coloured away strip. And the team has never worn a Granddad collar before. Nicely done, Under Armour.

In fact, the kit launch gave Spurs fans little moan about, and when it comes to complaining, Tottenham fans are top of the league, up there with the Scousers: When Everton redesigned their club crest this year, the fans revolted, demanding a re-design. The club felt forced to release a statement to declare the new badge was staying – but only for one season.

But perhaps I have spoken too soon, because the third kit hasn’t been unveiled yet, and it’s promised to be released later in the summer…and I’ve heard vicious rumours they’ve let Gazza design it.