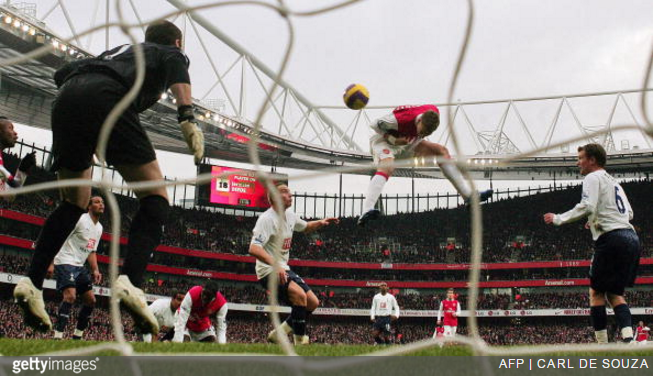 With 16 minutes to go in yet another fiercely-contested North London Derby at the Emirates, Arsene Wenger sent on striker Nicklas Bendtner for midfielder Emmanuel Eboue. Just 1.8 seconds after taking his place on the pitch, the lumbering Dane scored to seal the win for the home side.

All the goals had come in the second half. Emmanuel Adebayor had given the hosts the lead in the 48th minute after latching on to a smart back-heel from Cesc Fabregas, but Dimitar Berbatov gave the cross-town visitors hope with an equaliser on 66′.

Six minutes later, Kolo Toure chopped down Berbatov in the box. Robbie Keane stepped up to take the penalty, but shot weakly and Manuel Almunia saved the kick.

Two minutes later: cometh the hour, cometh the man. Wenger made his change after Arsenal won a corner. Bendtner took up position by the far post and, as Cesc Fabregas’s corner swung over, charged into the box and rammed a header past Spurs keeper Paul Robinson to put the Gunners 2-1 up.

It was his first touch of the game, and an English record for the fastest goal ever scored by a sub.