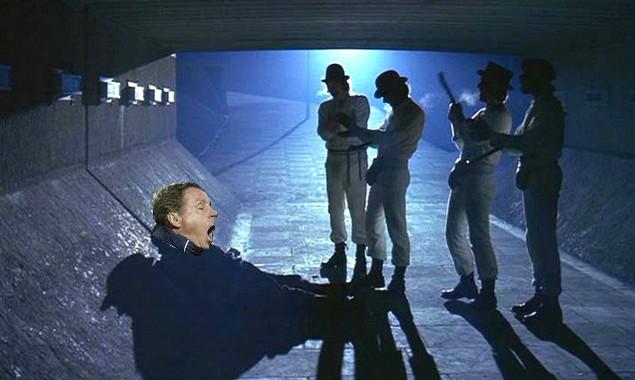 Tottenham manager Harry Redknapp has revealed that he (and his No. 2, Kevin Bond) were mugged in Madrid, ahead of the Copa Del Rey tie between city rivals Real and Atletico on Thursday evening, after being distracted by strange men tugging on his trousers.

Redknapp, who was in Madrid to run the rule over Atletico frontman Diego Forlan, regaled his ordeal to the PA:

“I’m walking round the outside of the stadium, it’s a fantastic atmosphere, there’s all little stalls there selling sweets.

“I got some sweets, me and Kevin, and it was so packed. The next thing there’s two guys on their knees in front of me and I felt someone pull my overcoat.

“I thought ‘What’s that?’, and didn’t take any notice. The next thing there’s two guys on their knees in front of me and they’ve got my trousers and they keep doing this (tugging) with them, pulling them.

“I thought ‘What are you doing?’ The next thing he’s got my keys on the floor. I didn’t know whether to knee him in the gob or not.

“And I thought ‘Is he a blind man or someone having trouble walking properly? What are they doing, these two blokes?’

“They took everything. All my money, credit cards, everything really. They probably didn’t know who I was but they had a result, I’ll tell you that.

“I wasn’t wearing anything flash. I had an overcoat on. I just probably looked stupid or something, and they thought ‘Here’s one here, he’s not Spanish, obviously, and we’re looking for a foreigner.’

“They were probably in this restaurant we were in, drinking the best wine and having the best steak there. Me and Kevin didn’t have enough money to have a glass of wine.”

“I don’t know what Kevin was doing while it was going on. He said ‘I saw them doing it.’ And I said: ‘Why didn’t you do anything then? Strange that, Kev!’

“I hope he wasn’t part of the gang, though e’s got a few quid on him today!”

Triffic! Lots of fun, had by all.