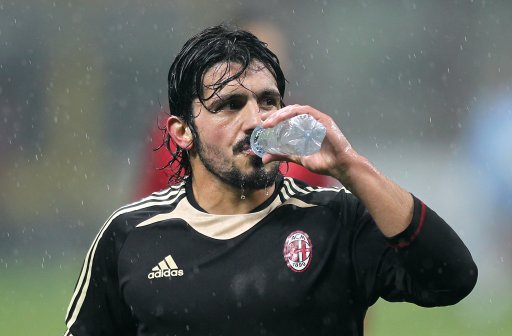 Tottenham assistant Joe Jordan has struck back (verbally, thank Jehovah) at Gennaro Gattuso, branding him ‘pathetic’ after the AC Milan midfielder claimed that his seething meltdown in the San Siro on Tuesday night was provoked by racist remarks.

Gattuso apologised immediately after the game, but his agent Claudio Pasqualin later claimed that Jordan had provoked his client by calling him a ‘f**king Italian b*stard’.

Safe to say that Big Joe was not amused by Gattuso’s insinuations, telling the Daily Mail:

“It’s just a nonsense, it really is. It’s a figment of Rino’s imagination and, I have to say, not a great imagination, at that.

“If he wanted to try and explain his behaviour, you would have thought he might have come up with something better than that. It’s pathetic.

“Completely and utterly untrue and quite pathetic.”

Gattuso has since been charged with ‘gross unsporting conduct’ by UEFA for his actions and will learn of his punishment at a hearing next Monday, but Jordan is hoping that his false claims of racism will also be addressed by the relevant authorities:

“[Gattuso] will have to address his conduct overall, and account for himself to UEFA, but the allegation he has made is something else. I’m not having that, because Italy has played an important part in my life and will continue to.

“Milan are an exceptional club and I consider myself very fortunate to have played for them. I had plenty of high points in my career, but signing for them was the best thing I did. They gave me a chapter in my career I always hankered after, a spell playing abroad, and I could not have picked a better club.

“I love Italy and have always had an affinity with the people. Does that sound like someone who would come out with the sort of line Gattuso has got his agent to say? I just find it pathetic on his part, I really do.”