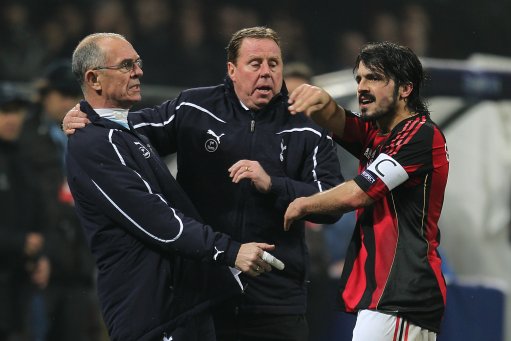 As you may be aware, UEFA handed Gennaro Gattuso a four-match ban for his little tete-a-tete with Tottenham assistant Joe Jordan last week which, in addition to the original one-match suspension he incurred by picking up a booking earlier in the evening , means that the Milan scrapper will now be unavailable for the next five of the Italian club’s upcoming fixtures.

“They gave me a five-match ban… they may as well have put me in prison for a month!”

The midfielder will also miss the return trip to White Hart Lane after being ‘advised’ by owner Silvio Berlusconi not to travel with the rest of the squad in a fortnight’s time:

Regaling his sepia-hued memories of the aftermath of his touchline barney with Jordan, Gattuso added:

“Young Alexandre Pato ran to the locker room –  he was probably hiding in the bathroom! – and it’s lucky Antonio Cassano was ineligible for the Champions League.

“I was meant to be his tutor on how to behave at Milan and he said: ‘What a great example you set for me!”

Yep, you read that correctly, Gattuso has indeed been charged with keeping Antonio Cassano’s conduct in check.

Like setting a flaming gazelle loose inside a dynamite factory.