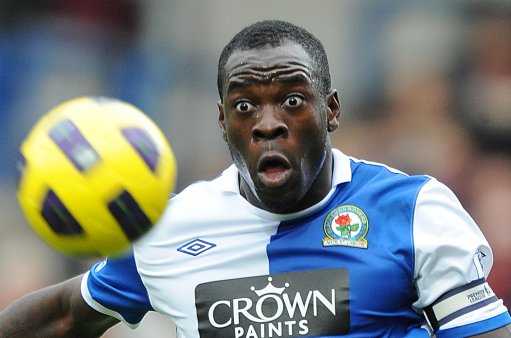 Undoubtedly one of the most consistent defenders in the Premier League over the past few years, Christopher Samba has finally decided to leave Blackburn Rovers, handing in a transfer request at the struggling club.

Now 27-years-old, the goal-scoring centre-back is in his prime and no doubt wants to escape the negativity pervading Ewood Park.

He said, via a statement:

“I have personally informed the owners, manager and executives at the club that I want to leave in this transfer window.

“In my five years at Blackburn Rovers Football Club, I have always given 100% in every game I have played. I have had several opportunities to leave but I have always stayed.

“I have decided now is the right time for me to pursue a new challenge and I have asked the club to respect my decision and allow me to leave.

“I thank the fans for their support and I hope they feel I have served them and their club well.”

Samba’s old Rovers’ boss, Mark Hughes, has already made a couple of bids to bring the defender to QPR, who remain the likeliest destination for the African.

However, surely Samba has what it takes to play for one of the top six in the Premier League? Indeed, if he doesn’t end up at Loftus Road, then don’t rule out Harry Redknapp making a cheeky move for the player before the end of the month – while across the channel, rumours of a bid from oil-riche PSG are also growing.