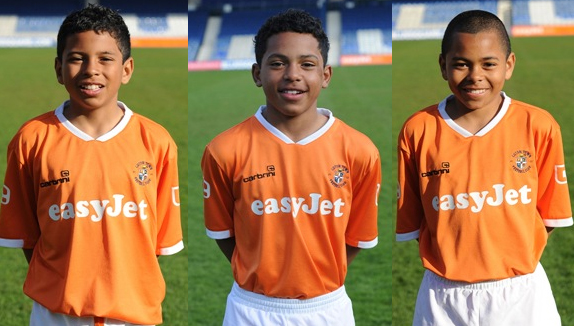 All blessed with good footballing names, Rio, Cole and Jay Dasilva are the latest youngsters to be snapped up by the big boys, after the Luton Town youth players were signed up by Chelsea, each for a five-figure sum.

Twins Rio and Cole, 12, and their 13-year-old brother Jay will join the Blues’ academy after spending five years with Luton, with the total value of the deal potentially reaching around £1million for the Hatters, if the trio make it all the way to the Chelsea first team.

“Following our loss in the play-offs last season we were told that the boys wished to look at other options, as was their prerogative to do so,” he continued. “And now after six months of uncertainty, we are delighted that they have found a club where they are settled and one that recognises the development work that Luton Town have put in over the last five years.”

If they all make it in the professional game, the Dasilva boys will join a select band of three or more siblings to all play at the highest level.

Other super-siblings include the Wallaces (Danny, Ray and Rod), the Tourés (Kolo, Yaya and Ibrahim), the Sodjes (Akpo, Sam and Efe), the Eto’os (Samuel, Daniel and Etienne), the Linighans (Andy, Brian and David) and the Latchfords (Bob, Peter and David).

However, those triumvirates are still trumped by the fab fivesome of Allan, Frank, Derek, Kelvin & Wayne Clarke.