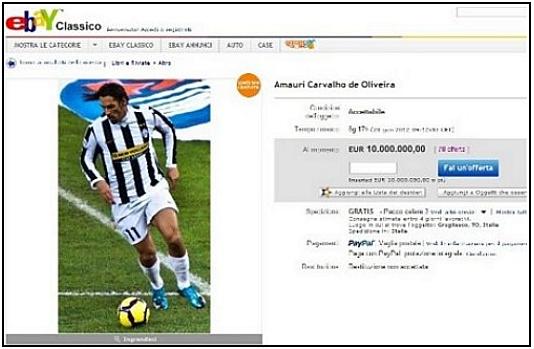 Since signing from Palermo for a shade under £19 million back in 2008, it’s fair to say that Amauri has contributed the square root of f**k all to the Juventus cause. Barring a fairly decent goal-to-game ratio in debut season, he’s been – in Layman’s Terms – dire and, as such, has been informed by Juve that he is ‘free from any obligation vis-a-vis the club commencing from January 2012’ and ‘no longer included in the new technical programme’.

Desperate to get shot of the lank-haired, Brazilian-born wage-sponge, a couple of enterprising Juve fans slapped Amauri on Ebay – promising delivery within four working days, free shipping, and full-back Paolo de Ceglie thrown in to sweeten the deal.

The strange thing? Bidding reached €10 million (£8 million) before Ebay pulled the listing. Who the hell is out there labouring under the illusion that Ebay is a viable player acquisition method?