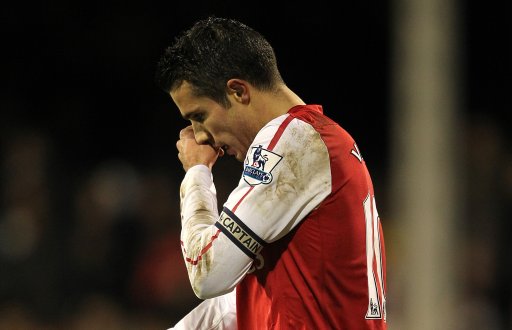 Grade A shit-stirring from Zlatan this morning, in which the wandering, trophy-laden Swede urges Robin van Persie to up-sticks at Arsenal and move on in search of the trinkets his talent deserves:

“When you don’t win anything for years, people understand why you leave like Cesc Fabregas. Football is all about winning. If you don’t win you want to go.

“I don’t know Robin personally, but I remember him from Holland and what a talent he was — now he is complete.

“I don’t know what he is thinking but I know what I would do. I have made a lot of moves in my life — I take it as a challenge, an adventure. I have won eight titles in eight years with different clubs in different countries.

“But if you stay in one place all your life it is easy to play football. You are at home, you are in the comfort zone, but if you move to five different places it is a real test.

Sounds very much like Zlatan choose to view his ‘here, there and everywhere’ career path as some kind of mythical sequence of Herculean labours in which he will emerge a demi-god upon retirement rather than of a man whose own monolithic ego has seen him jettisoned from club after club – but he has a point.

At this point in time; bearing in mind he’s 28, firmly in his prime and has an FA Cup and a Charity Shield to his name – is RVP just too good to merely toil away as the sole world-class constant in Arsenal’s current transitional mire? I don’t wish to Arse-bash, but it doesn’t look like they’re winning much any time soon.