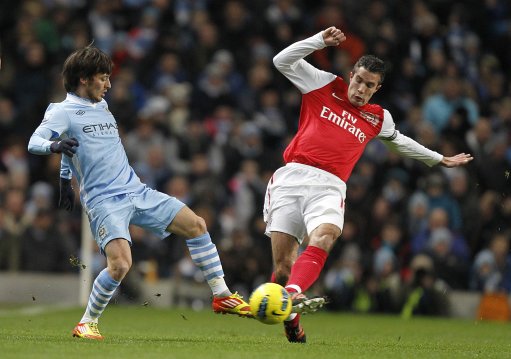 Man City manager Roberto Mancini has confirmed that he wants to sign Arsenal’s in-form Dutch striker Robin van Persie. Obviously not content with a forward line which includes Sergio Aguero, Mario Balotelli and Edin Dzeko, the Italian is now looking to tempt Van Persie away from the Emirates with some of that trademark City oil money. He said:

However, despite professing an interest in Van Persie, Mancini believes that the striker, who only has a year left on his current contract, will remain with the Gunners and pen a new deal.

“But if this player wants to stay, we don’t have any problem. In my opinion, Van Persie will stay at Arsenal.”

Still, with the Gunners reported to have secured the £10.9 million services of another gifted, left-footed attacker in the shape of German international Lukas Podolski, the possibility of Van Persie leaving north London in the summer in search of silverware (and a lot more money) does remain.

Gooners will no doubt be hoping that Podolski has been brought in to play alongside their Ductch superstar rather than to replace him.