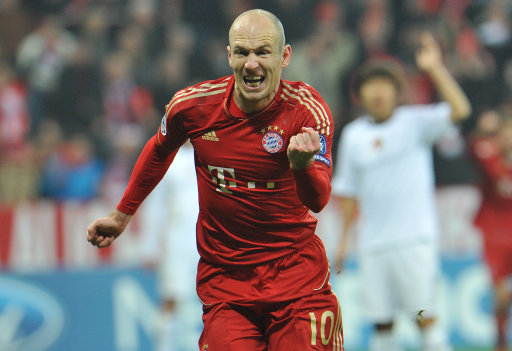 Despite his penchant for diving, moaning and rarely passing to his teammates, despite all that!, Arjen Robben lit up the Premier League in his time with Chelsea, helping the Blues to consecutive titles in the mid-noughties as he sprinted up and down the flanks.

Eventually, after an injury-strewn last season in England, the prematurely-aged Dutchman moved to Real Madrid. After a decent spell with Los Merengues, the wideman then moved on to another one of Europe’s giants, Bayern Munich. However, now it looks likely that Robben will leave the Bundesliga behemoths, with the player frustrated at being left on the bench in recent games. He said:

“It cannot be said that I am 100% certain I will stay with Bayern. A lot has happened in recent weeks and I didn’t play for three games in a row. Everybody saw that. It was not the best of times.”

With only a year left on his current contract, Robben is now looking at his options, news which is sure to have a number of Premier League sides readying their chequebooks. However, Bayern bigwig Karl-Heinz Rummenigge is desperate to keep the wideman with the offer of a lucrative new deal. He said:

“Arjen can make all the difference in a team. That’s why I want him to stay.”

Still, it is looking increasingly likely that the fleet-footed attacker will jink his way out of Germany, with moneybags Man City surely a possible destination. Then again, still only 28-year-old (yes, I know!), Robben could surely do a job for any of the division’s big teams?