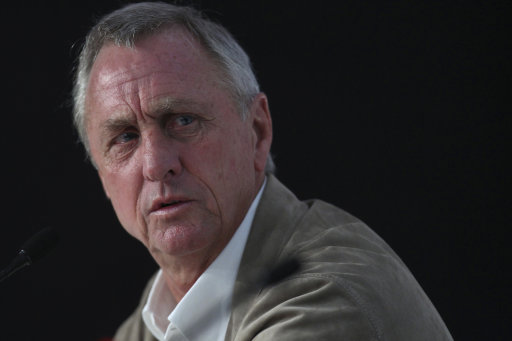 The BBC understands that, after surgically removing Damien Comolli from their staff yesterday for fluffing all their dollars on snakeoil and unicorn teeth, Liverpool owners FSG are eyeing up none other than Johan Cruyff (who, it says here, used to be a footballer of some distinction but is perhaps better known as the man from the asteroid) to step into the breach at Anfield.

Indeed, several of this morning’s newspapers also think that Cruyff and Liverpool are sitting in a tree, N-E-G-O-T-I-A-T-I-N-G.

‘Director of football’ just conjures visions of a man – Cruyff in this instance – sat alone in an office at the very top of a spiral staircase, his breath visible in the cold, dank air as he searches Football Manager for ‘players between 18-23 with a potential rating between 15-20’ then forlornly starts to type out emails to agents.

Anywho, Cruyff has resigned from a supervisory role on the Ajax board after an prolonged period of legal wrangling with the Dutch club’s directors over the appointment of Aloysius Paulus Maria van Gaal (‘Louis’ to you and I) as a director at the Amsterdam Arena.

Strangley, Van Gaal’s (who has been unemployed since being sacked by Bayern Munich last April) name is also being mentioned in passing with Liverpool – with the Beeb hinting that he has ‘indicated he would consider the position’ were an offer formally presented to him – like he once formally presented his scrotum to Luca Toni.

It all has the kind of faint air of ‘Comolli sacked > Google ‘directors of football’ and see who’s out of work’ about it, but apparently Cruyff in particular has impressed Liverpool owner John W Henry in his advisory roles with Ajax and with Chivas Guadalajara in Mexico.

Sounds fishy to me, but if the rumours come to bear fruit, I’d wager that Cruyff would be presumably charged with assisting Kenny Dalglish – y’know, in much the same way that Gerard Houllier was bought in to ‘assist’ Roy Evans.

Will it happen? Won’t it? Anyone care?

Sorry, I got next to no sleep last night. I’m a little narky.