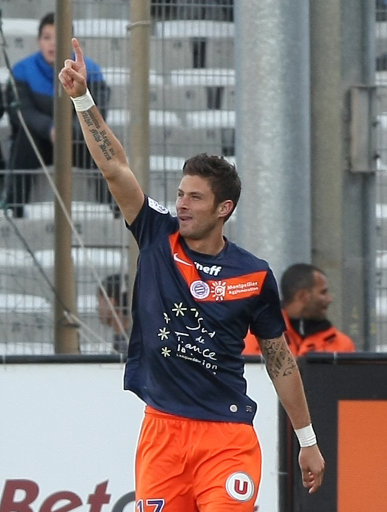 Montpellier, a club akin to Wolves in size and financial power, pulled off a fantastic shock in Ligue 1 this season, beating moneybags PSG to the French title and showing that, despite the Chelsea and Man City’s of this world, it is still possible to succeed without some rich geezer spunking bazillions on his latest plaything.

While Montpellier’s success is based largely on their superb youth set-up, man of the moment Olivier Giroud was picked up on the cheap from second tier side Tours in 2010. However, this season, the left-footed hitman exploded into life, bagging a joint-high 21 league goals along with nine assists.

Now, Arsenal lead a queue of clubs eager to snap up the 25-year-old and while he is guaranteed Champions League football with Montpellier next season, a move to the Premier League may suit the striker. Indeed, reports from France are suggesting that the Gunners are preparing to offer Marouane Chamakh and £6.5 million for Giroud. Although, with Robin van Persie (if he stays) and Lukas Podolski already there, do the Gunners really need another left-footed attacker?

Anyway, check out his best bits this season. And look out for Giroud at Euro 2012 next month…