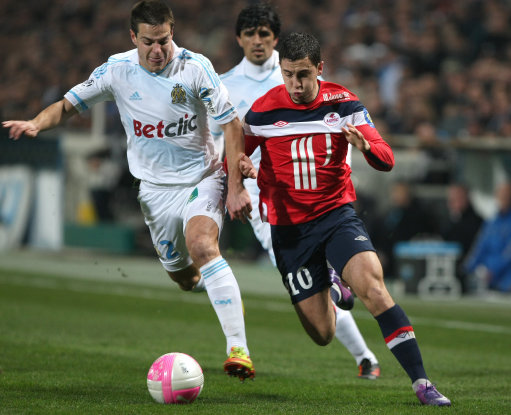 At last, with white Papal smoke billowing out of his arse, Lille’s much coveted Belgian winger, Eden Hazard, has finally told the world who he’ll be signing for – and it’s none other than Euro-conquerors Chelsea.

The 21-year-old wunderkind has been the centre of a tug of love with both Manchester clubs, Chelsea and god knows who else all making a play for Ligue 1’s star performer. And while either the blue or red half of Manchester was assumed to be his destination of choice, Hazard has decided to go for the Blues. On Monday evening, he Tweeted:

Now, unless he’s got confused and thinks that someone else won the European Cup this year, it’s Chelsea all the way for the attacker. A figure of £32million is being quoted for the star, who will join the Blues along with recent signing, Marko Marin, another silky wideman. And with Brazilian attacker Hulk also reported to be on his way, Roman Abramovich’s rebuilding job at Chelsea is starting to look rather tasty. If only he could sort out the manager’s job as easily.