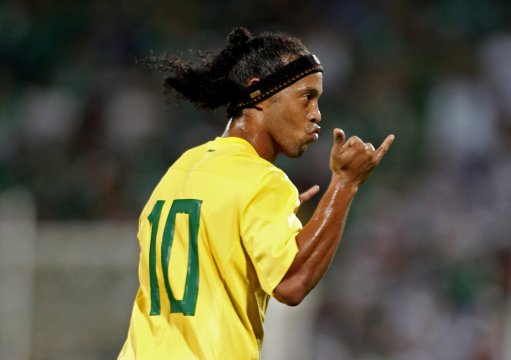 What a sight it would be – the buck-toothed Brazilian legend Ronaldinho lighting up Ewood Park on a wet Tuesday night for Blackburn, or maybe playing in the hole behind Peter Crouch for Stoke at the Britannia. All this and more could come to fruition, possibly, maybe. Anyway, what is true is that the samba star has quit Flamengo over an apparent dispute over unpaid wages totalling $20million.

According to the former Barcelona star’s lawyer, Gislaine Nunes, a court ruled in favour of Ronaldinho’s request to terminate his contract with Flamengo. Nunes said:

“His contract has been terminated. Flamengo has already been notified. Now we are demanding a very high amount in compensation, of course, which he has the right to receive by contract.”

Now a free agent, and still only 32 years old, surely the superstar could still make his mark in the Premier League? I bet ‘Arry Redknapp is on the blower to his agent right now. Or maybe Blackburn’s Steve Kean will finally get his man after previously trying to sign the Brazilian. Who knows!

To be honest, Ronaldinho will probably end up in the middle east or Russia for a last big pay day.