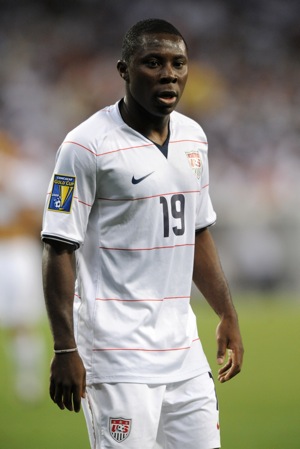 Freddy Adu’s less-than-convincing career took an unexpected turn today, with the news – revealed by Adu himself on his Twitter page – that he is to join Aris FC of Greece on an 18-month loan deal from current club Benfica. It’s his third loan spell since the summer of 2008, when he was farmed out to Monaco. Does this mean that he looks good in training but flatters to deceive? Certainly all the Nike-flavoured hype about Adu has proved to be rather without substance – but he’s still very young (20), so he may yet deliver on his potential.

Btw, the Mirror claimed earlier today that “Phil Brown is moving out Kevin Kilbane and Jan Vennegoor of Hesselink to fund a loan bid for American striker Freddy Adu”, but the young American chose Greece instead – an interesting choice, and I wonder if Jozy Altidore had any say in it? In other words, did Jozy warn his compatriot that Hull is a freezing sh*thole?