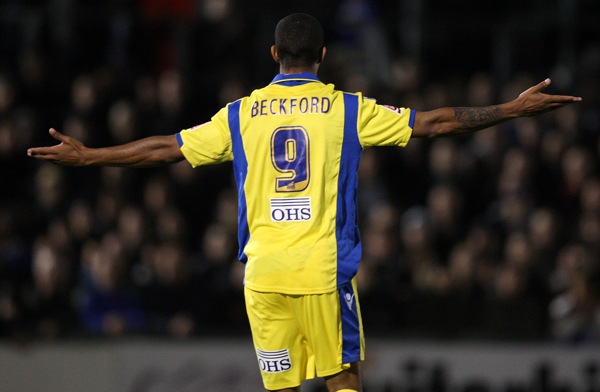 “Leeds United can confirm that Jermaine Beckford has handed in a transfer request.

“The transfer request was handed in on December 30.

“By handing in a transfer request it clearly indicates that the player wants to leave Leeds United.

“However, that will only be allowed to happen in the event that it is decided to be in the best interests of Leeds United.

“The best interests of Leeds United involve receiving both an acceptable transfer fee and securing a suitable replacement to ensure his departure does not have an adverse effect on the club’s overall aim of securing promotion back to the Coca-Cola Championship.”

It’s obvious that Beckford and his agent are in a rush to advance his career – to be fair to Jermaine, he’s 26 years old and better than a League One player – but could they not have waited until the end of the season to do this, rather than cynically choosing the immediate aftermath of the player’s goal at Old Trafford against the Premier League champions?

Leeds are fighting for promotion to the Championship, and Beckford is vital to that push – and even though I believe Leeds have enough quality elsewhere to gain automatic promotion without him, losing your star striker is rarely a good thing.

It’s been all too easy to come to the conclusion that Beckford has a suspect attitude – body language, the odd tantrum after being substituted – and many Leeds fans never really warmed to him, despite his scoring feats.

No doubt if Beckford does move on this month – Newcastle seems a likely destination – he will be branded a Judas by some Leeds fans. There’s a fine line between disloyalty and ambition – on which side of the line do you think Beckford stands?