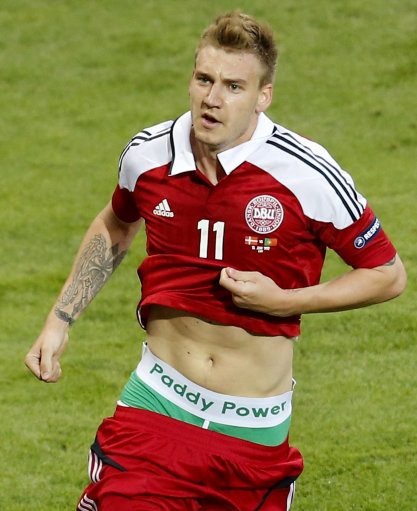 As if told by Liam Neeson that he will be found and he will be killed if he doesn’t leave Arsenal, kidnapper/outbound striker Nicklas Bendtner has warned potential hostage negotiators/suitors that he has some very specific demands that must be met if you’re serious about purchasing him.

Discussing his options (of which remaining at Arsenal is not one), Bendtner told Danish media: “I have three demands and I won’t sign a deal with a club who aren’t prepared to fill those demands.”

Intriguing. Of course, we can only speculate, but…

1. Start with a classic. $1,000,000 in unmarked, non-consecutive bills and a getaway helicopter waiting at the airport.

2. Nicklas Bendtner’s name to be engraved onto all trophies on display in the silverware cabinet of new club. Nicklas Bendtner will also hold all club scoring and appearance records with immediate effect.

3. An enormous golden statue of Nicklas Bendtner to be erected (preferably in ‘Christ the Redeemer’ pose) looking down over whichever town his new club happens to be situated in. If joining club in Rio de Janeiro, original ‘Christ the Redeemer’ statue will unfortunately have to be torn down.

Strange thing is, we’re probably not that far off. Realistically, Nicky Bendts is probably after wage parity, guaranteed boxer short waistband advertising space and boring old chuff like that – but he’s always likely to sneak something ridiculously egotistical in there.

What do you reckon Pies fans? What’s he after?