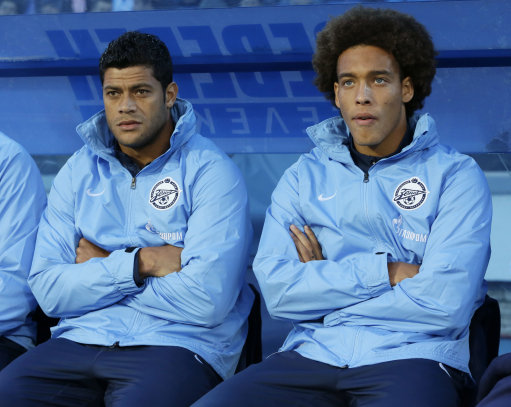 All is not plum dandy over at Zenit St. Petersburg at the moment, where two of the club’s senior players have been forced to train with the club’s second string after having the gumption, the bare-faced cheek to raise concerns over the wage disparity between new signings Hulk and Alex Witsel and EVERY SINGLE OTHER PERSON AT THE CLUB.

Vice-captains Igor Denisov and Alex Kerzhakov sought a meeting with the club’s top brass, concerned that the ridiculously mahoosive £6 million and £3.5 million yearly salaries paid to £61 million pair Hulk and Witsel respectively vastly overshadow the next top earners at the club – and that that may prove to cause a bit of tension between the ‘haves’ and the  ‘have-slightly-less-but-still-earn-small-fortunes’ within the Zenit squad.

Denisov is quoted by the PA as saying:

“I’m certainly not against foreign players coming to Zenit, but there must be a balance in the team.

“Yes, the club has bought good players, but do you think they are so much better than us that they should make three times as much?

“Zenit already have great players who have won as many titles as the new guys. I would understand if we got Messi or Iniesta. They would deserve any price.”

Zenit themselves are portraying a slightly different version of events, issuing a statement that it’s greedy guts Denisov (who is though to earn about £2.5 million a year – a relative pittance!) that is refusing to play until he’s handed an even fatter wodge:

“Denisov had refused to play after issuing an ultimatum to renegotiate his contract. He was demanding more money.

“The club feels that Denisov’s demands are groundless as he already is one of the best-paid players in the Russian league.”

Several other players are standing by Denisov and Kerzhakov’s griping, with Vyaceslav Malafeyev, Vladimir Bystrov and Alexander Anyukov all pledging their support for the Zenit Two.

The poor lambs. Having to scrape by on just a couple of million quid a year. How do their families eat?