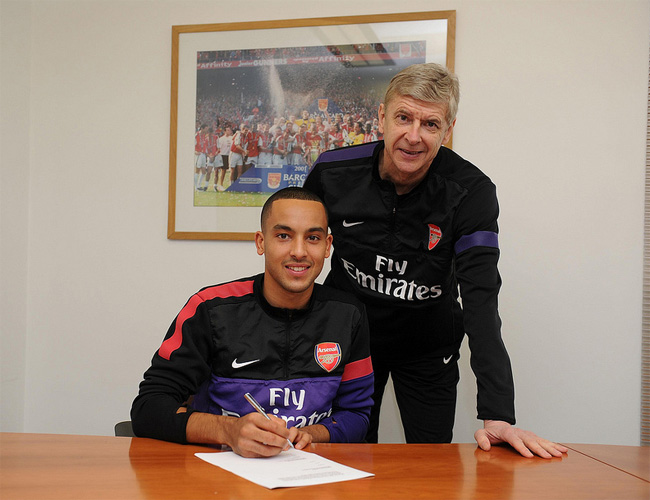 It’s been the biggest will-he-won’t-he saga since er, Robin Van Persie’s similar drama back in the summer, but this time, the Gunners have indeed got their man. At least for a few years more.

After months and months of talks and media speculation, Theo Walcott has finally signed a new “long-term” deal with Arsenal, one which is reported to be worth £100,000 a week along with a rather nice £3million signing-on fee.

“We are all delighted that Theo has signed a new contract. He joined us as a 16-year-old and since then has developed very well to become an extremely important player for both Arsenal Football Club and England.

“Theo is a strong player and also a great person, and the combination of his ability and pace always make him such a valuable asset either from the flanks or down the middle. Theo’s contract extension now gives us a strong nucleus of ambitious young players who have committed to the Club and want to be successful with us as a group.”

While the fleet-footed Walcott had this to say:

“I am very happy to have signed a new contract here at Arsenal. Thanks to everyone for their continued support, especially the manager, everyone at the club and most importantly the fans. I have made it clear from the start that I wanted to stay at Arsenal so I am pleased we have agreed a deal that ever.”

Now, while many Gooners will be questioning how on earth the (still) inconsistent striker/winger can be the club’s highest-paid player, the fact that Wenger and co have decided to splash the cash on Walcott is surely  a positive sign. Wenger himself has recently claimed that now that the Emirates is all but paid off, the club can start to flex their financial muscles once again. So keeping their best (or better) players courtesy of some generous pay rises is surely the sensible option. But if this new deal isn’t backed-up with a few more sexy signings before the January window slams shut, expect Gooners to be less than pleased. Again.