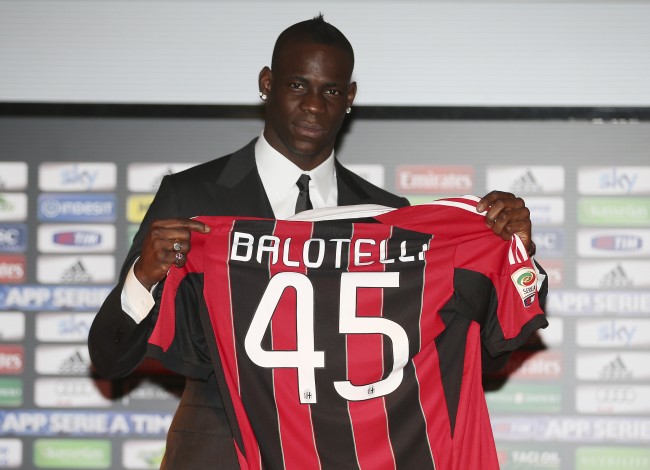 Here’s Mario with his new work togs, posing with Milan coach Massimiliano Allegri and Adriano Galliani at his official unveiling at the San Siro yesterday.

Balotelli also held a brief press conference, in which he had a few last things to say about English football:

“If I have to be honest English football is beautiful. It’s ahead of Italian Calcio. But I had this dream to play for Milan.

“In England they talk about my personal life and exaggerate. Here in Italy you report their reports. I’m focused on Calcio.

“I spoke to [Italy coach Cesare] Prandelli and he told me he’s happy I’m back in Italy and I can get back to playing football.

“I have to say thanks to all City fans for always supporting me. I have to thank my teammates and my manager.

“The only good things in England were when I was at Carrington training. Everything else in England was bad things.”

When he was asked what he didn’t like about his time in England, Balotelli replied, “The press, the weather, the food, the way I like to drive, are all bad things about England.”

Yep. Hard to disagree on any of those counts.

Balotelli also flat-out refused to answer a question from a Sun journalist, telling him, “Your newspaper always wrote bad things about me, so I don’t want to answer any of your questions.”