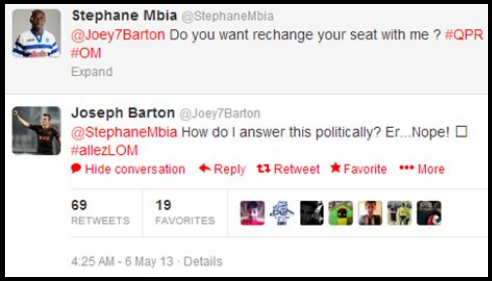 Last night, a Tweet was sent to Joey Barton (who has just been suspended for two games for calling Thiago Silva a “fat ladyboy”) from the official Twitter account of QPR midfielder Stephane Mbia, asking if the two could swap places.

Barton responded, giving it the old “no way, Jose”.

It’s worth noting that Mbia has since played the old “hacked account” card and QPR are investigating his claims.

“I did not write the tweets, and I have made people at the club aware of that,” Mbia said. “I saw the messages this morning and spoke with the club about them, but now I see there are more appearing in my name.”

It’s uncertain whether the now-deleted message is/was kosher, though given that level of commitment to the cause that the majority of the QPR squad have radiated this season, it’s not hard to imagine that Mbia already has his eyes on the exit – not that many Hoops fans would miss him.