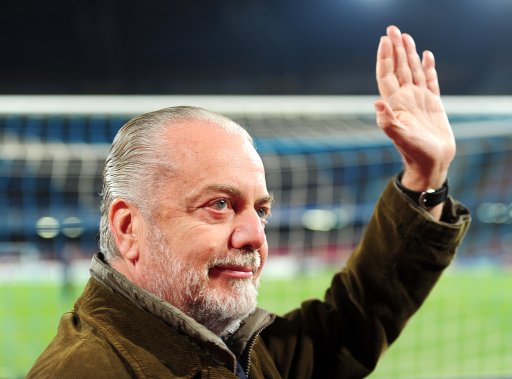 M is for mental case

It’s fair to say that madcap film producer/Napoli owner/Alan Sugar’s stunt double Aurelio De Laurentiis is fond of the “the show”. Whether he be fleeing from supposedly rigged cup draws on the back of a stranger’s moped or unveiling his new signings from underneath rubber lion masks, the man clearly likes to make a hullabaloo about the smallest things.

Last week, fairly long-serving Napoli coach Walter Mazzarri announced he is to leave the club this summer having guided the Azzurri to second place in Serie A in 2012/13 after four seasons in charge, which presented Mr De Laurentiis with the perfect opportunity to start acting up over just who is to take the reigns come June.

Rather than keeping schtum and conducting talks in private, the man they call “De La” round Italy way has stoked the press embers by simply telling the world that his new coach “will begin with the letter ‘M'”.

That’s it. You’re not getting any more than that Chuck.

Unfortunately for De La, we’ve seen straight through the Napoli president’s smokescreen and we know exactly who’s in line for the job at the Stadio San Paolo.

Sure, the likes of Mancini, Montella, Martinez and Mourinho are all plausible-ish. Hell, given this is De Laurentiis we’re talking about it’s entirely possible that Mazzarri is a prime candidate – but there can only be one “M” in question here…