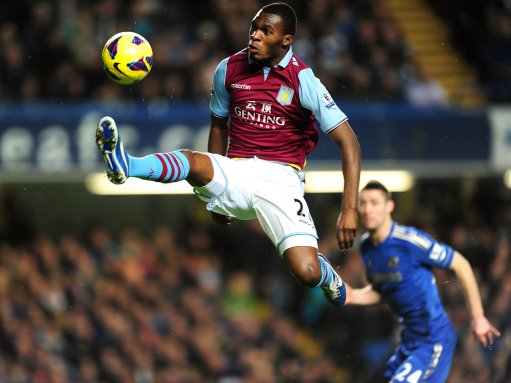 Things are up in the air with Benteke at the moment

It seemed like he was all but vowing to stay on a further year at Villa Park to prove himself to be more than a one-season wonder not so very long ago, but today Christian Benteke has apparently told Dutch newspaper Nieuwsblad that “if Villa force me to stay, I won’t necessarily accept that.”

Spoken like a man (or his agent) who is well aware of the leverage he has in any contract renegotiations that may be ongoing with Villa at the moment.

Having rattled away 19 goals in a soft-bellied side this season, Benteke’s being linked with a parade of teams across the continent, with Tottenham, Arsenal, Chelsea, Inter Milan and Dortmund (who are supposedly geared up to make an approach if Robert Lewandowski is offloaded this summer) all mentioned in passing.

At the moment it’s all rumour and tittle-tattle, but he’s certainly in demand and it’s probably fair to say that a whole raft of big clubs have sat up and taken notice of the blustering 22-year-old Belgian’s attributes after such a successful debut season in the Premier League.

The fact that Tottenham don’t have anything in the way of a dependable striker and a fair wodge in the way of disposable income is perhaps ominous, but our gut instinct is telling us that Benteke will eventually sign on again at Villa for vastly inflated wages (he’s currently scraping by on just £15,000-a-week) after making them sweat it out for the next 86 days.

And, of course, if Villa do sell up and are left needing a direct like-for-like replacement then Carlton “The English Benteke” Cole has just been released by West Ham. Perfecto!

What do you reckon Pies fans? Where would you like to see Benteke turning up come 17th August?