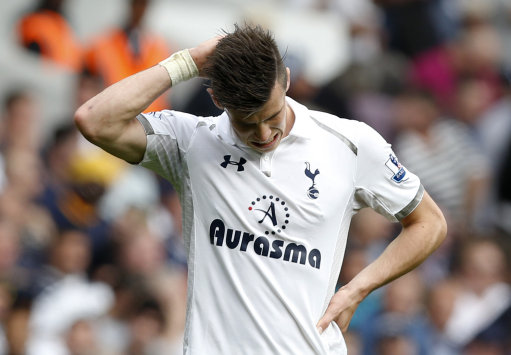 Gareth Bale’s agent, Jonathan Barrett, pulled a bit of a gutsy move last night when he appeared on (notoriously pro-Real Madrid) MARCA TV’s “Futboleros” chat show and told the hosts that he’d happily consider any offer Madrid honcho Florentino Perez made for his client this summer.

“If Florentino is interested in Gareth Bale, it would be an honour and we’d listen, but his contract is with Tottenham. We aren’t free to talk with anybody at the moment, that’s the point we’re at.

“I can understand a lot of teams are interested in him. He’s a great player but he has a contract with Tottenham. I don’t know if there has been a bid [from Real Madrid]. What I do know is that the player has three years left on his contract.”

Barnett went on to discuss Bale’s market value in relation to Neymar, with the Brazilian having just signed up for five years at Barcelona for an initial fee of €28 million (plus an absolute avalanche of pricey add-ons that could eventually take the fee up to €51 million):

“Bale is a better player than Neymar and he’s demonstrated it in one of the best leagues in the world. I would imagine clubs want [Gareth], not just because they missed out on Neymar, but because of how good he is.

“He should be the first option, but we’ll see. Bale is worth more than Neymar. Bale is very relaxed. He’s enjoying a deserved holiday. He only wants to be happy and enjoy his football.”

We’re sure it’s all just posturing to squeeze a bumper extension out of Levy, but you get the feeling that Barrett would also be perfectly happy if Spurs call his bluff and Bale ends up at the Bernabeu anyway.

So, will Bale move on this summer? It’s unlikely, but Flo Perez is attempting to usher in a new dawn at Real with Zinedine Zidane overseeing the whole thing – a man who recently named Bale in his top three in the world. As recommendations go, it doesn’t get much better than that.

Even so, we’re fairly sure we’re going to wake up to the news that Bale has signed a new £300,000-a-week deal at White Hart Lane in the not-so-distant future.

Where do the Pies faithful think Bale will be doing his falling over next season?