It’s the worst kept secret in football anyway, but the official Premier League website spaffed their wad a bit early today when they accidentally published an article which announced Jose Mourinho’s appointment as Chelsea manager, which was stripped down almost immediately after going live… 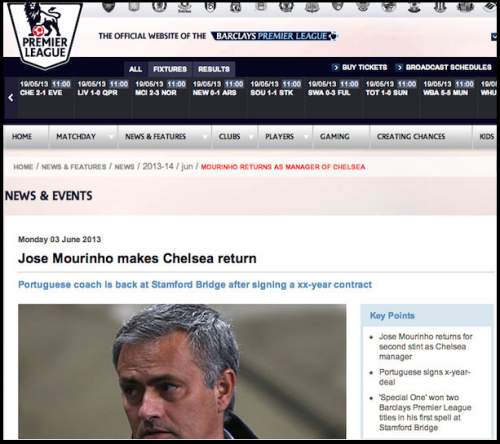 The story is dated “Monday 3rd June 2013” and none of the contract details have been filled in, indicating that the Premier League aren’t actually privy to anything that the rest of the world isn’t yet – other than Mourinho is going to reappear at Stamford Bridge at some point in the next few days/weeks.

Indeed, the story – described as a “publishing error” by the Premier League’s tech bods – is little more than a pre-prepared placeholder which would’ve been published as and when the Mourinho news breaks, with some work experience lackey accidentally leaning on the big red “publish” button a few days early.