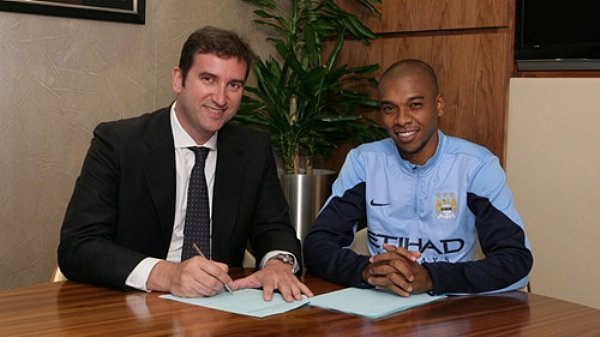 Seems like getting their bum bums paddled by their cross-city rivals in the Premier League last season has put a rocket up Manchester City, with the club already chucking £51 million at the problem to bring in former (we’re assured) chronic homesickness-sufferer Jesus Navas from Sevilla and the man they call Fernandinho from Shakhtar Donetsk.

The Brazilian attacking midfielder officially signed a four-year deal with City yesterday for a fee believed to be as much as €40million (that’s £34million)  – take that FFP! – and will take up the No. 25 shirt. Apparently he also waived a £4million bonus from Shakhtar to complete the move too. Obviously not short of a few bob, this lad.

The spectrum of reaction so far seems to range from “how much!?” right through to “who?” with most interested parties wondering just what City are doing spaffing such an inordinate amount of money on a 28-year-old who has amassed the grand total of five international caps over the course of the last two years.

As many have pointed out, you get the feeling City have paid at least a £10million premium for the -inho suffix.

No doubt Fernandinho’s a tricky dicky with a steady stream of goals to his name accrued on his way to winning 15 major honours (including the UEFA Cup) with Shakhtar since joining them from Atletico Paranaense eight years ago, but still you wonder where he’s going to fit into the City starting line-up (maybe finally scooching Gareth Barry aside?) given their already swollen midfield ranks.

You just feel that such a substantial wodge of cash could’ve been put to better use, i.e, to bring in a real big hitter. For example, £34 million would go a long way towards sticking on a partial down payment on one of Edinson Cavani’s legs.

What’s your verdict on the move Pies fans? Any of the City supporters out there happy with what you’re seeing?