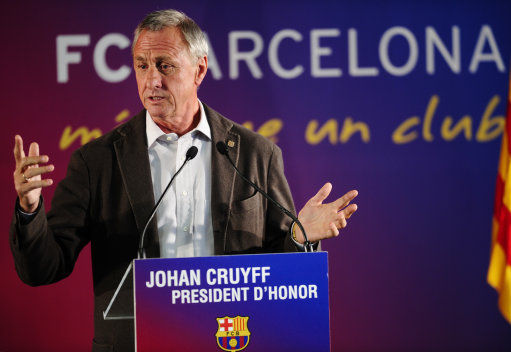 “Messi? This Jordi Cruyff boy I’ve heard so much about is available on a free…just sayin’!”

Johan Cruyff has told Marca that, although he wouldn’t have signed Neymar in the first place, now that Barcelona have splooged £50million on the Brazilian, they should now be thinking long and hard about selling Lionel Messi as the team cannot possibly support two such superstars.

Jopie, who has served Barca as a player, coach and honorary president (later stripped) in the past, wibbled:

“No, I wouldn’t have signed Neymar [but] with Neymar on board, I would have planned for the possibility of selling Messi – and some would agree with that, others not.

“You are talking about a team, its players, the things around it … There are too many things at stake. That’s why it’s so difficult to manage such a top class squad.

“It’s like the free kicks. Neymar is very good at taking them, and Messi has already shown he is. Who’s going to take them?

“Or the fact that Neymar and Barcelona are with Nike while Leo is with Adidas. These are situations that could cause problems. We’ll have to wait and see – it could turn out well or badly. It’s a risk.”

Yep, playing Neymar and Messi; what a terrible, terrible risk.