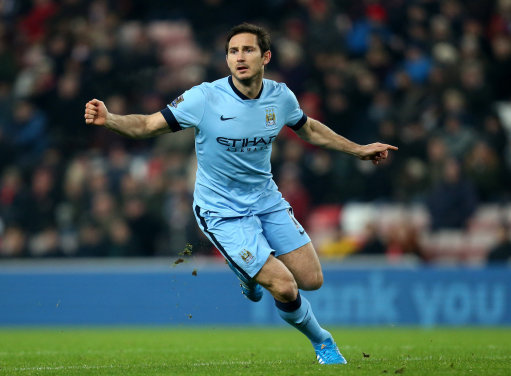 The announcement that Man City have extended Frank Lampard’s loan deal in order to allow him to play on until the end of the season has, unsurprisingly, not gone down well with supporters of the midfielder’s parent club, inbound MLS franchise New York City FC.

Having joined NYCFC as a marquee signing at the tail end of July after being released by Chelsea, Lampard immediately joined City on a six-month loan deal with the plan being for him to return to the States in January in time for the start of the 2015 MLS season.

However, City have since confirmed this morning that Lampard’s deal at The Etihad has been extended to the end of the 2014/15 Premier League season, meaning he’ll now miss NYCFC’s opening fixture on March 8th.

City’s little revelation has riled fans of the MLS side, many of whom have taken umbrage after buying season tickets and the like after being lured in by seeing both Lampard and David Villa used prominently in the NYCFC launch marketing hype.

Indeed, the news was quickly denounced by NYCFC supporters’ group The Third Rail, who issued the following statement:

“On behalf of the Third Rail, we would like to publicly denounce City Football Group’s and Frank Lampard’s decision to extend his loan to Manchester City until the end of the Premier League season.

“Many fans, including our members, decided to support the team, committed to season tickets, and bought merchandise under the impression that Frank Lampard would be playing for New York City Football Club, not Manchester City. Many of those fans are rightly outraged by this decision, and we support any course of action they take to voice their discontent over this decision.

“Our support for our ownership group has been unwavering until now, but this we cannot support. We reject out of hand any suggestion that NYCFC is in any way secondary to Manchester City FC, regardless of the source, and are disappointed that City Football Group would give such an appearance.

“The Third Rail will forever act as a voice for the fans of New York City Football Club.”

Former New England Revolution coach Steve Nicol also decried the deal in an interview with ESPN, claiming the deal was a “disaster” for MLS due to the message it will send to fans vis-a-vis the integrity/credibility of the league.

“I can’t wait to hear from (MLS commissioner) Don Garber.”

For what it’s worth, Garber’s deputy commissioner, Mark Abbott, issued a short statement on the MLS website to assuage any lingering doubts:

“Frank Lampard’s performance at Manchester City reaffirms that he is one of the world’s elite midfielders and we look forward to him joining NYCFC during the 2015 season.”

So there you go. Everything’s fine.

We know fan culture is a little different in the US, but it baffles us that anybody could feel so passionately about a football club that hasn’t played a single game, currently has a grand total of 15 senior players on their books and, for all intents and purposes, doesn’t really exist properly yet.