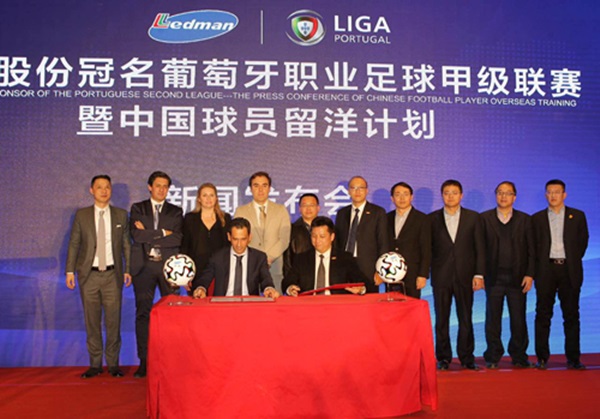 If the Against Modern Football movement doesn’t have enough cause for complaint then today’s news will leave them tearing their hair out.

From the start of the 2016/17 season, the top 10 teams in the Portuguese Segunda Liga (soon to be known as the Ledman Proliga) will be required to include at least one Chinese player in their squad after a new sponsorship deal with Ledman, the Chinese lighting manufacturer, was announced this afternoon.

Under the terms of this unprecedented deal, nearly half of the division’s 24 teams will be forced to not only include at least one Chinese player but, according to Portuguese football reporter Tom Kundert, will have to play them enough to meet an as-yet-unknown ‘minimum usage’ quota.

The 10 Chinese players “must play in top 10 clubs in 2nd tier, and have minimum usage rate.” I’m no jingoist but this is madness.

As well as the player quota, Ledman have also dictated that at least three Chinese assistant coaches will take up positions at any of the ten clubs involved.

Portuguese website Observador notes that while the country’s Professional Football League have yet to confirm the deal themselves, it is only a matter of time before an announcement is made.

Portugal and China have become economic bedfellows in recent times, with the European nation receiving more investment from the Far East than any other EU member state except Britain, Germany and France.

The Portuguese responded in kind by sending former Chelsea boss Jose Mourinho and his agent, Jorge Mendes, to Shanghai to deliver a number of conferences and speeches. Whatever they said seems to have done the trick.

It begs the question, may we see Segunda Liga clubs, perhaps already weighed down by poor finances, attempting to finish outside of the top 10 and thus avoiding being lumbered with a player they may not want or need?

China has made moves to become a jewel in football’s crown over the past few years. Star names from Europe such as Didier Drogba, Nicolas Anelka and…erm…Gazza have plied their trade, while Gervinho’s £14million transfer to Jiangsu Suning (who are also close to completing a £25million deal for Ramires) was confirmed this afternoon.

For now, all we can do is wait to see how this unfolds.